There are various ways to generate terahertz waves. TU Wien lists cryogenic quantum cascade lasers for high intensities, or down-conversion by mixing multiple optical lasers, which is flexible but bulky. Miniature structures exist, but some requre silicon lenses to extract power, or features too small for conventional optical lithography.

“Our goal was to develop a simple and extremely compact terahertz source,” said TU Wien engineering professor Michael Feiginov. “If we want a technology to be incorporated into everyday devices in the future, then the terahertz sources must be small and function at normal room temperature.”

The team turned, as others have before, to a simple patch antenna as both antenna and resonant structure, and resonant tunnelling diodes (RTDs) for gain.

The square patch (sizes from 50 and 200μm across were tried) sits on top of a metallised chip surface.

Two diodes meant doubling the gain to generate output power, but more importantly meant that the patch could be designed to resonate the diodes in anti-phase, with the electric field sloshing across the patch between the two.

Why this is important, is that it puts a zero-voltage node in the centre of the two unused edges, one of which can now be used as an input power feed point without loading the resonator – one of the principle potential sources of damping has been eliminated. 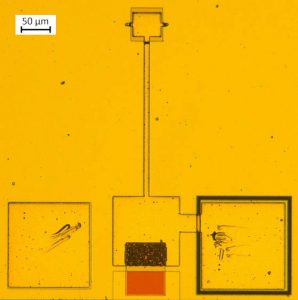 Resonator-radiator patch at the top, with diodes either side, and a long feeder leading down to the metal-insulator-metal damping capacitor and its resistor. Contacts are at the bottom either side of the damper

However, feeding power into that point could stimulate a symmetrical mode, where the point would be at a signal maximum and both the diodes would switch simultaneously. To supress this, the feed line was made long and thin (photo left) with an integrated RC snubber at its far end (bottom centre) – the dimensions and values picked for high loss at the rogue mode.

The last major design choice was to design the diodes so that their gain could compensate for the remaining losses in the patch and its feeder, with enough left over for the patch to radiate energy.

As the InGaAs/AlAs diodes, grown on the InP substrate, had to be large enough to be made by optical lithography, the team traded away top-end frequency and maximum power output for practicality, employing relatively thick tunnel barrier running at low current density in the structures, said fellow engineer Petr Ouředník (pictured). The resulting RTDs were 4 – 6μm2 in area.

Where will they be used?

“There are so many application ideas that we can’t even say today which one is the most realistic,” said Feiginov. “The terahertz range is used in radio astronomy, one can use it to see through optically opaque objects, for example in security checks at the airport or even in material testing. Another application is chemical sensors: different molecules can be recognised by the fact that they absorb very specific frequencies in the terahertz range. All these technologies will benefit from simple and compact terahertz sources.”

The work is described in full in Applied Physics Letters as: ‘Double-resonant-tunneling-diode patch-antenna oscillators’ – full paper can be viewed without payment.

10 Best Liquidation Stores in Edmonton for Best Deals in 2022

What to Wear to a Wedding Reception