Washing out an MGN7 linear rail


The need was for two 150mm MGN7 (7mm wide) rails and four trucks, and it transpired that buying five rails+trucks was the cheapest way to do this as they are supplied as a kit for makers of the remarkable open-source Voron 0.1 3d printer.

Chinese-made linear rails have bought this high-tech motion control into the realm of DIYers, but quality varies considerably.

I previously bought some 12mm rails from a 3D printer manufacture that sold them as spares – these were well made – the company had good reason to do quality control, and had done it. They were not Hiwin or German quality, but nice.

The five 7mm rails are a grade or two down, but still properly serviceable, despite their low cost.

However, every rail that has arrived so far, including the 12mm ones, have had metal fragments inside and have needed cleaning – this makes them stop abruptly when gently operated by hand.

In the 12mm case, I dismantled them. They were beautifully smooth afterwards, but this is a fiddly process during which I managed to loose two of the 120-odd ball bearings, so they now operate with this loss.

The balls in the 7mm trucks are far smaller, and there would be over 300 of them to marshal, so a different procedure was in order. 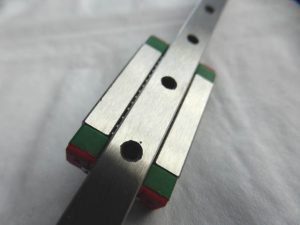 There remains a gap between truck and rail when assembled (photo left), so I put this side downward in a bath of white spirit (also known as turpentine substitute or mineral spirits) and gently worked the truck back and forth, never forcing it past obstructions.

And tiny metal shards did indeed drop out into the liquid.

Initially, I also removed the red dust shields (not the green ball retainers) to allow the solvent better access, but got nervous that I might loose one of the tiny screws and put them back again.

Once the worst of the grit was out, they were stood on end and in other orientations while the trucks were slid to increase the chance of dislodging stray particles.

Two of them has stubborn debris, so I squirted WD40 (the only thing I had to hand with a fine nozzle) into the greasing port. I don’t know if this made a difference, as they still needed much swishing in the bath, but they came clean eventually.

BTW, two of the greasing ports (holes in the red ends) were closed by plastic from the mouldings, which I pushed out with a 1.4mm drill after unscrewing the ends.

At the end of two hours, there were five clean free-running linear rails, and one bath of spirit with a small pinch of iron filings in the bottom – collected by a magnet I occasionally swept across the bottom.

It would have been quicker, but I dropped one on the floor and had to re-clean it, and later had to return to the bath when one of the trucks caught on its rail again.

Do I think they are perfectly clean? – no

Are they smooth and serviceable? – yes, indeed

Which way would I do it next time – this bath method